Geraldine Phoebe Braswell, age 91 of Ozark Missouri went home to be with the Lord, Saturday August 7, 2021, in her home with family by her side.  She was born in San Francisco California, January 13, 1930, to Paul Menconi, Sr. and Amelia Zolezzi-Menconi.  Geraldine played the piano beautifully and studied at the Moody Bible Institute in Chicago, Illinois.  She met Marvin at a revival in Cupertino, CA while several were gathered around the piano after the service.  She would often tell the story how she caught Marvin’s eye as they were singing “Farther Along”.

Gerrie and Marvin married October 6, 1951, and they would often hold services on the street corners ministering to folks as they would pass by.  Their marriage was blessed with two children.  Mark Paul Braswell and Joy Belle Braswell-Acosta.

Marvin and Gerrie pastored a church in Shingle Springs CA for several years before retiring from pastoral ministry and moving to Indio, CA.  Gerrie was a legal secretary for most of her life and was always involved in music ministry.  The family would often gather around the family piano, worshipping the Lord with praise music and hymns   There was nothing like listening to her play.  One of her favorite hymns was the Old Rugged Cross.  She was a class act, had a fun sense of humor and loved to laugh.  She was truly loved by all!

Geraldine was preceded in death by her husband Marvin Roy Braswell and son Mark Paul Braswell. She is survived by her daughter Joy Acosta, Son-in-law Alex Acosta, grandchildren Phoebe Salgado, Steffani Acosta-Braswell and William Acosta-Braswell, great grandchildren Nayeli Salgado and Eleanor Salgado. She is also survived by her sister Elizabeth Stephens of Oakdale CA and many nieces, and nephews. 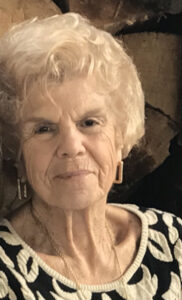