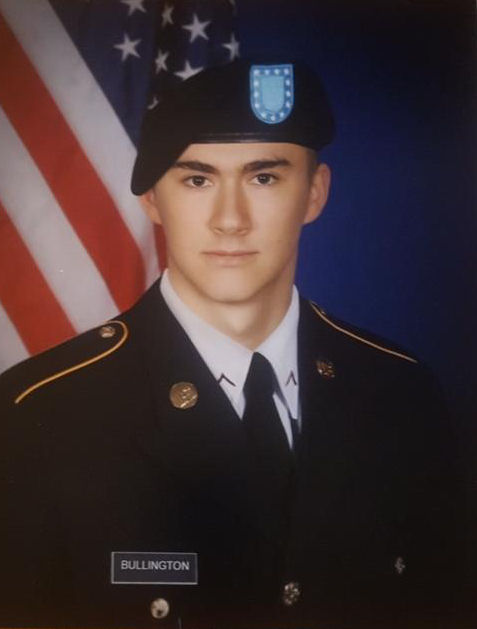 Rhys Bullington, age 20 of Sparta, Missouri passed away Saturday, May 29, 2021. Rhys was born October 15, 2000 in Glenwood Springs, Colorado and moved to Sparta, Missouri December 2004.
Rhys attended the Sparta School system Elementary through to his Freshman year of High School at which time he made the decision to enroll at the Missouri Military Academy in Mexico, Missouri. Rhys found lasting friendships, made dedicated decisions to further his education and was recognized as the face of the Missouri Military Academy while attending the Academy.  Rhys excelled with his advanced programs and attained the rank of Cadet Major along with Company Commander of Delta Company while attending the Missouri Military Academy.  Upon Graduation from the Academy Rhys enlisted and became a soldier with the United States Army and the Missouri National Guard. Rhys also received the job title of 12 Bravo 35th Battalion Combat Engineer.
Rhys is survived by his loving parents Andrea and Travis Bullington of Sparta; his unborn child; maternal grandparents Randy and Diana Owens of Georgetown, Colorado; paternal grandfather George Bullington of Westminster, Colorado; aunt Debra Weber of Dumont, Colorado; two nephews Michael Burch from the state of Colorado, Caleb Burch from the state of California; niece Jerikka McKenna from the state of California; other caring relatives, friends and fellow military members. Rhys will be sadly missed but will live on forever in the hearts of his loving family, comrades and many friends.
Celebration of life services for Rhys will be 11:00 A.M. Monday, July 12, 2021 in Barnes Family Funeral Home, Ozark, Missouri. Burial will follow in Sparta, Cemetery. Visitation will be 10:00 A.M. to 11:00 A.M. in the funeral home. Online condolences may be shared at www.barnesfamilyfunerals.com