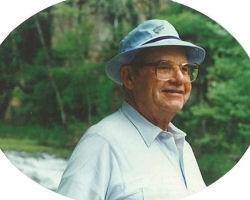 Arthur G. Smith, age 95 of Nixa, was born March 18, 1916 in Kansas City, MO and went to be with his Lord March 15, 2012 while residing at Ozark Riverview Manor. Arthur was office manager at Toledo Stamping and Mfg. in Toledo, Ohio for 35 years. He retired in 1979 and relocated to Ava and then moved to Nixa in 1996. Thanking God for the many wonderful years they have enjoyed with Arthur are his family; wife of 52 years, Ruth; and their children David M. of Springfield, Diana Hilterbrand and husband Jerry and their daughter Aspen Joy of Austin, CO; Arthur’s additional children Kenneth and wife Joni of Buford, GA. Elizabeth Geniac of Toledo, OH and Patricia Reiter of Sylvania, OH and several grandchildren and great-grandchildren; brother Joseph and wife Sue of Springfield, sisters Lorraine Welton of Independence and Barbara Burgin husband Les of Ava. Arthur was preceded in death by four brothers and three sisters. Private memorial services will be held at a later date. Anyone wishing to send a memorial in Arthur’s honor are asked to consider Springfield Victory Mission or Southwest Missouri Humane Society. Special thanks to St. John’s and Seasons Hospice and the wonderful staff at Ozark Riverview Manor. Cremation under the care and direction of Barnes Family Funeral Home, Ozark. On line condolences may be shared at www.barnesfamilyfunerals.com.