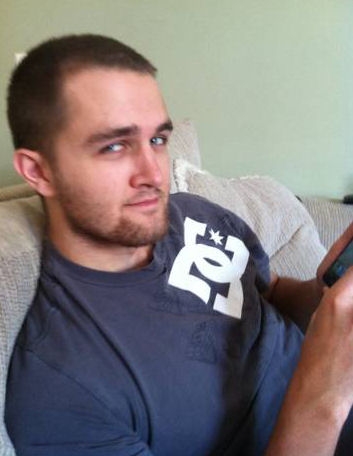 Steven Ross Hansen, age 24, passed away July 11, 2012, as the result of a tragic accident in his home, doing what he enjoyed best – taking care of Lindsey and her car. He was born January 13, 1988, in Springfield, Missouri, the son of Mike and Melinda Hansen. Steven grew up in the Sparta, Missouri, area and graduated from Sparta High School in 2006. A year after graduation, he joined the Air Force Reserve and attended basic training at Lackland Air Force Base in San Antonio, Texas. He subsequently attended A-10 crew chief tech school training at Sheppard Air Force Base in Wichita Falls, Texas, and Davis-Monthan Air Force Base in Tucson, Arizona. Upon his return home, he became employed with Springfield Public Schools and was recently promoted to head custodian at Rountree Elementary School. In August, 2010, he and Lindsey were married, and they purchased their first home in Ozark, Missouri, a year later. Steven loved to draw, loved airplanes, technology, gaming, and most recently the new home theater in his basement. He loved helping people and was a quiet and gentle soul. He had a wonderful, giving heart and expected nothing in return. His last act of helping others was by being an organ donor with Mid-America Transplant Services. He loved being a favorite uncle and was a very special brother-in-law. Steven had a wonderful sense of humor and wit. He was preceded in death by his brother Gary Hansen, his grandfather Byron Hansen, and his aunt Wende Hansen. He is survived by his wife Lindsey; his parents Mike and Melinda Hansen; his sister Mallory and her husband Jeremy; grandparents Joe and Brenda Ford; Harold and Jeanette Sawyer; and in-laws Tom and Susan Frizzell. “Try not to become a man of success, but rather try to become a man of value” “Only a life lived for others is a life worthwhile.” “A heart is not judged by how much you love, but by how much you are loved, by others.” Funeral services for Steven were held 7:00 p.m., Monday, July 16, 2012 in Barnes Family Funeral Home, Ozark with Pastor Troy Hull officiating. Visitation was held 6:00 p.m. until service time. Memorial donations for Lindsey may be made at any Empire Bank location. On line condolences may be shared at www.barnesfamilyfunerals.com.