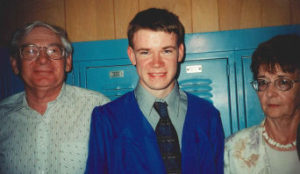 Vernon Haskins, age 77 of Ozark, Missouri formerly of Fordland, passed away Saturday evening, February 29, 2020 in Century Pines Assisted Living Dementia Care Facility. He was born March 29, 1942 in Midland, Michigan the son of Lexi and Lena Pauline Haskins. Vern was united in marriage to JoAnita (Lee) Haskins who preceded him in death December 9, 2016.

Vern graduated from Rogersville High School and later retired from Mid-American Dairymen Incorporated after 30 years of being a dedicated employee. His life was also filled with the pleasures of rural living on his farm where he cared for cattle, his dogs and donkey. In the early 60’s, Vern also proudly served his country as a member of the Army National Guard with the Second Regiment “Saints”. Vern was a committed husband to JoAnita and a loving dad to Aaron. He will dearly missed but his fond memories will live on forever in the hearts of his family and friends.

Vern is survived by his son Aaron Haskins; sister-in-law LaQueta Luttrull and husband Keith; three brothers Venton, Verlin and Dwain Haskins. In addition to his wife Vern was preceded in death by his parents.

Graveside funeral services will be 2:30 P.M. Wednesday, March 4, 2020 in Sparta Cemetery. Visitation will be 1:00 to 2:00 P.M. in Barnes Family Funeral Home, Ozark, Missouri. Online condolences may be shared at www.barnesfamilyfunerals.com